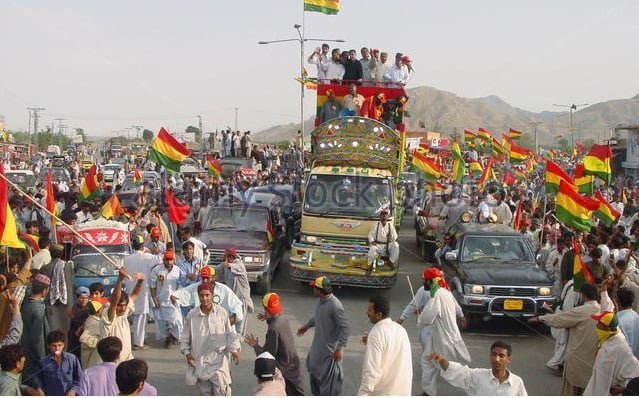 World politics is reshaping. So is Makran’s, long known as a center of secular and liberal thought.

In January, Sardar Yar Muhammad Rind, chief of the Rind tribe and President of the Balochistan chapter of Pakistan Tehreek-i-Insaf (PTI), visited Balochistan’s non-tribal Makran Division in a first-ever political foray to the area.

Talk of Rind’s visit had no sooner died out when another sardar announced he would be holding a jalsa in Makran’s Kech District on February 11. This time it was the former Chief Minister of Balochistan and head of the Balochistan National Party-Mengal (BNP-M), Sardar Akthar Mengal.

Both Mengal and Rind, worried that their representation in the provincial assembly is eroding, came to Makran for their political survival. Rind has not yet recovered from his shocking defeat in the NA-267 by-election in April 2016. Mengal has just two representatives in the Balochistan Assembly.

The major difference in both political stopovers is that Mengal was in Makran to play his nationalist card. Rind was using his tribal card in his visit to seek out Rind people residing in Turbat. In short, it was his attempt to call upon the loyalty of the tribe and secure their allegiance to join the PTI.

With respect to both visits, it is very hard to ignore the China-Pakistan Economic Corridor (CPEC) factor since it passes through Makran. In fact, it is the heart of the CPEC, so any political party showing streng ththere would also be in a strong bargaining position vis-à-vis the establishment. The new center of politics is Makran.

And what makes Makran different from the rest of Balochistan? Although secularism has been a mainstay of Baloch nationalism and Balochistan has been far removed from religious extremism compared to the other Pakistani provinces (the Sunni, Hindu, Shia and Zikri have all been living there harmoniously for decades, respecting each other’s religious practices and some even intermarrying), Makran has remained a sardar-less society, and has even fought against them.

Although he traveled all the way from Africa to accompany the BNP-M party chief to the jalsa Mengal organized in Turbat, it should be noted that former Senator Sana Baloch was not given a chance to share his thoughts. Hardly anyone could even see him sitting on the stage with the top brass of the BNP. Many Baloch youth expressed their disappointment, wondering if there was any place for people with such vision anymore.

Mr. Baloch has always believed in investing in education and local human resources, and in resolving issues through dialogue. He believes that if there is to be any hope for Balochistan’s economic viability, it must be allowed to have control over its own resources and economy, and that mechanisms need to be put into place to accomplish this. Because of his experience and many well-reasoned writings, Mr. Baloch is one of the few Baloch politicians to be called upon to render his services to the United Nations on international missions.

As expected, the BNP’s gathering was all emotion and fist-shaking, the speakers failing to come up with any pragmatic solutions for the problems the Baloch face. But this is really typical of all parties in Pakistan, and Balochistan in particular. They work on people’s emotions with incendiary speeches rather than presenting reasoned solutions.

Throughout his speech, AktharMengal criticized the National Party (NP) and Balochistan’s former Chief Minister Dr. Abdul Malik (who hails from Makran and is the province’s first non-tribal chief ever elected Chief Minister), and lambasted the establishment. Did Mengal say anything new? Not at all.

Politics should be the art of possible. Making alliances is a cornerstone of politics, especially when there is a convergence of interests. When examining statements coming fromthe NP and the BNP, it would seem that both share the same agenda – attending to the interests of the Baloch. But one wonders why, despite a shared purpose, they walk away from each other. Do their personal interests overshadow Baloch interests?

The Baloch are swimming in a sea of issues critical to their survival– the census, religious extremism seeping into the province, the CPEC drama, and the influx of Afghan immigrants. Representing the interests of the citizenry is the responsibility of both the NP and the BNP. Akthar Mengal should understand this and stop denouncing the NP and its leadership, and adopt a new mantra of cooperation when it comes to the people whose interests he claims to represent.The same goes for the NP. Survival of spirit of the Baloch nation depends on the survival of its people.

A photo taken during his visit to Turbat is now circulating on social media that shows Sardar Yar Mohammad Rind sitting like a king with people sitting subserviently on the floor in front of him. Today’s world demands that we move away from the outdated tradition of sardari rule which places tribal loyalties above all else. Today’s world expects those who seek to lead to be accountable to their constituencies and their needs. Would either Rind or Mengal sacrifice the title of Sardar and all its entitlements for what is best for the Baloch people?

They are now elected local leaders of political parties. It is time to give up the inherited titles. Will visionaries like Sana Baloch emerge in either the BNP and the NP anytime in the near future? Isn’t it high time that both parties begin to walk in the footsteps of Yousaf Aziz Magsi and reject the old sardari system? Although he was nawab (chief) of his tribe, he stopped using the word “Sardar” before his name.

It is believed in some constituencies in Balochistan that no ordinary person running for election could possibly win against the sardars and feudals. But this thinking shows ignorance of the fact that Prime Minister Zulfiqar Ali Bhutto introduced candidates to run against the feudals in Punjab and Sindh, and these candidates did win. Why are Baloch nationalists afraid of challenging the false narratives of traditional politics? If they are serious about the well-being of the Baloch, they would admit that a different way is needed. A developed society must break the chains of the tribal mentality which once had a purpose but no longer has one in today’s world.

Makran, known as the intellectual hub of Balochistan, seems to be battling many forces – including this new emergence of tribal politics. The politics of Balochistan is on the verge of slipping out of the hands of nationalist parties because of overriding concerns. Religious extremism, insurgency, increasing numbers of right-wing groups, hand-picked sardars and “carpetbaggers” from other provinces coming in and taking jobs are the more pressing issues of the day. The litmus test for the NP and the BNP will be whether Makran’ssecular, non-tribal and liberal society can be kept alive and thriving.
Extraordinary times require extraordinary measures. An alliance between the NP and the BNP is needed in order to serve the best interests of the Baloch people. What drives Baloch politics in the future will depend on whether both parties want to carry on with “politics as usual,” or come up with new strategies that can actually empower the nation.
History will show us who actually took action against outdated norms,values and traditional politics and who among them did more, who just made emotional speeches and who worked on improving the well-being of the Baloch. It will show whether personal interests of leaders overshadowed Baloch interests, or whether leaders sacrificed personal interests in order to the build a Baloch nation able to compete in the modern world. At the moment, the verdict is still out.